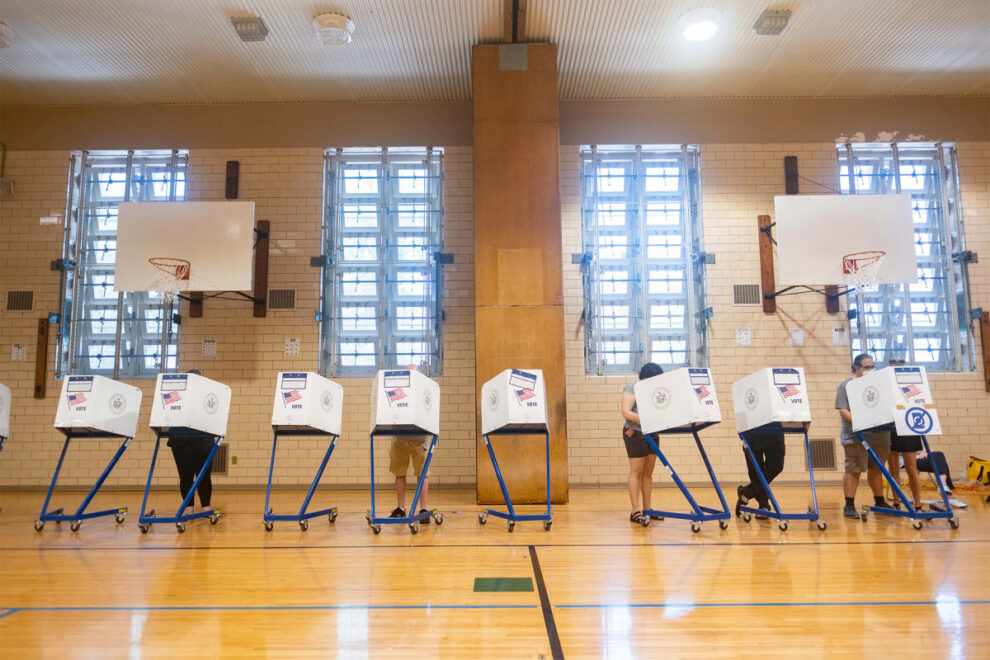 
The controversial bail reform law approved by Democrats in the last legislative session will loom large in a slate of contested state Senate races as New Yorkers begin casting their ballots in person Saturday at early voting sites throughout the state.

Early voting runs from Oct. 24 through Nov. 1 at 88 city polling sites ahead of the Nov. 3 election [check vote.nyc to find your polling site].

Meanwhile more than 2.3 million voters have requested absentee ballots amid the coronavirus pandemic and over 665,000 have already been returned. That means a substantial number of state voters will cast their ballots before Election Day; nationally more than 50 million Americans have already voted early. The deadline to request an absentee ballot is Oct. 27.

In the state Senate, Democrats now hold a comfortable 40-20 majority with three seats vacant due to Republican retirements.

Dems can secure a potential veto-proof majority to challenge fellow Democrat, Gov. Andrew Cuomo on any legislative battles if they pick up two seats, raising the total to 42.

But Republican candidates are using bail reform as a cudgel to try to paint first-term Democratic incumbents who voted for the changes as “soft on crime.”

The law eliminated cash bail for mostly non-violent felony crimes. But following an outcry after a series of incidents of serial felons being released and arrested for committing violent crimes, Cuomo and Democratic lawmakers passed revisions tightening the law and allowing for more judicial discretion to detain defendants deemed dangerous.

“Clearly the issue of bail reform, the issue of public safety has come to the forefront in a way I think I have never seen before. The Democrats over the last year and a half — they made this the issue because they decided to make pretty revolutionary changes to the criminal justice system,” said Senate Republican Minority Leader Robert Ortt.

Ortt said the crime issue became more potent after liberal Democrats began “talking about defunding the New York City Police Department. It used to be a given that whomever was in Albany or an elected official they all supported law enforcement. Now that is not the case.”

Still, Republicans are in a tough spot, having to play defense thanks to a wave of retirements of veteran GOP senators, forcing them to try to spend money to keep vacant seats in the GOP column.

Democrats have a clear financial advantage with the backing of unions and other interest groups — but billionaire Ron Lauder and the Police Benevolent Association have stepped up to spend up to $5 million to level the playing field for the GOP in suburban battleground races.

Senate Deputy Majority Leader Mike Gianaris (D-Queens) dismissed what he claimed are GOP “scare tactics” over bail reform and exuded optimism that the Democrats would expand their dominance in the chamber.

“Every two years the Republicans try to find an issue to scare voters. We’re happy to focus on our record,” said Gianaris, who rattled off laws passed by the Democratic-led state Senate since taking over power in 2019 to bolster gun safety, codify abortion rights and strengthen voting rights and ballot access.

More ominous for Republicans, Gianaris said, is that President Trump is less popular in all the contested districts — even those he carried over Hillary Clinton in 2016.

“There were some personally popular Republican senators serving in Democratic districts. They all fled to the exits,” he said.

Bruno is seeking to hang bail reform and rising crime around Gounardes’ neck. The incumbent, who chairs the committee that oversees civil service and pension legislation for government workers, benefits from strong backing from unions and has focused on bread-and-butter district issues during his tenure.

— Political watchers say the first-term Democratic incumbent most imperiled by the police unions’ fury over bail reform is state Sen. Kevin Thomas in Nassau County’s 6th District. He faces a strong challenge from Dennis Dunne. The PBA has made defeating Thomas its top priority — spending $1 million from a political action fund to aid Dunne.

— Former two-term Republican County Executive Rob Astorino is attempting a comeback by trying to oust first-term Democratic state Sen. Pete Harckham in the 40th district that takes in northern Westchester and Putnam counties. Astorino, a skillful campaigner, lost his re-election bid for a third term in 2017 after being defeated by Andrew Cuomo in the governor’s race in 2014. But Trump is not expected to have coattails in this district and Harckham is formidable.

— In the 41st district, there’s a rematch between Republican state Sen. Sue Serino and Democrat Karen Smythe. This district takes in Dutchess County and parts of Putnam County. (Kent, Phillipstown and Putnam Valley). Serrino defeated Smythe by only 646 votes two years ago.

— GOP state Sen. George Amedore is retiring in Hudson Valley’s 46th SD. The GOP candidate seeking to replace him — Rich Amedure — has a similar last name. But the Democratic candidate is Michelle Hinchey, daughter of the popular, late congressman and assemblyman Maurice Hinchey.

— In the 50 SD in the Syracuse region, GOP state Sen. Bob Antonacci retired to become a judge. Democrat John Mannion, who captured 48 percent of the vote against Antonacci two years ago, is running again for the open seat. He will face off against Republican Angi Renna. Mannion, a high school teacher, is getting strong financial backing from the teachers’ union.

— In the 55th SD in the Rochester area, GOP state Sen. Rich Funke is retiring. Democrat Samra Brouk will face off against Republican Christopher Missick.

— In the Buffalo-Erie County region’s 60th district, there’s a vacant seat after Republican Chris Jacobs stepped down and was elected to Congress. Democratic Assemblyman Sean Ryan and Republican Joshua Mertzlufft are vying to succeed him.