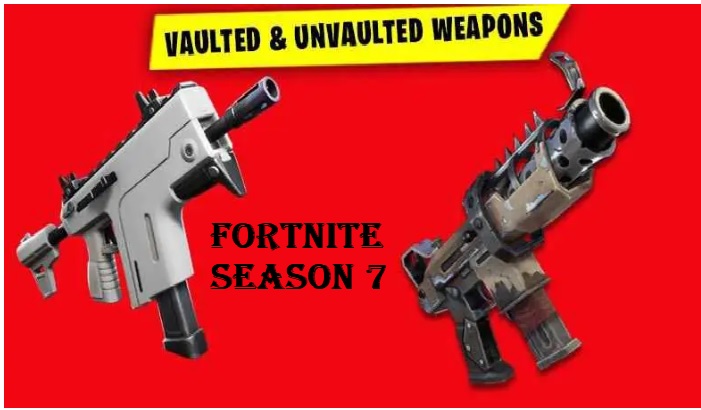 Fortnite has finally brought its new Season Fortnite Season 7 with the alien and sci-fi themes, new characters, and other unlockable cosmetic items. The most exciting change is the arrival of new weapons.

The Kymera Ray Gun can be found in Rare, Legendary, and Epic rarities and able to “emits a continuous and deadly ray”

The rail gun is a “high-tech rifle” that comes in the same rarities as the Ray Gun. Rail Gun can fire one powerful shot.

The Pulse Rifle is an automatic weapon that can be found in Rare, Epic, and Legendary rarities. Pulse Rifle slows down in fire rate when aiming down sights.

List of  all Vaulted and Unvaulted weapons in Fortnite Season 7

Besides these, like other Seasons Fortnite has vaulted and unvalued many weapons this season. Fortnite Season 7 will starts today 8 June 2021 at any time. Let us check all the weapons before the season begins.

According to the reports by HYPEX, this time Primal Theme weapons will remove completely.
Thanks for reading! Stay Connected with us for more latest updates.
Also read: WhatsApp might soon allow users to verify log-in with new ‘Flash Calls’ feature
Also read: Riot Games’ Valorant is coming to Mobiles? Check all details here
TagsFortnite Season 7: List of all Weapons