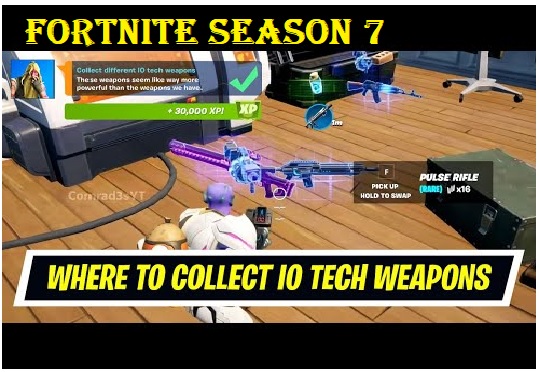 Fortnite’s latest alien-themed season Fortnite Season 7 is finally here for players. In the Fortnite Week 1 Challenge, Players ask to get IO weapons. Like other Seasons, players need to complete some quests to gain extra XP.

The three Fortnite IO tech weapons players need to collect are the Rail Gun, Recon Scanner, and the Pulse Rifle. However, they can only be found at specific locations.

Collecting these weapons will help you to complete the challenge and earn Battle Stars. These battle Stars will help the players in the gaming to purchase any item at any time

IO Tech weapons are scattered everywhere on the land. There are many IO bases on the map.  The best way to find IO tech weapons is to land at the different IO outposts scattered throughout the Fortnite map.

These IO bases have a glowing red light on a satellite dish that can be seen from the sky. This is not difficult to land in such locations. Once the player reached there, you will find chests that have lots of rare loot for Fortnite players to collect.

These IO chests are of different shapes and dark. These chests aren’t guaranteed to drop an IO tech weapon, but the chances are much greater than that of the standard chests. Normal chests can drop IO weapons, so don’t avoid them.

Players will have to look at particular boxes at the IO base. These IO weapons are hidden in such boxes. At every base, the player will find at least one box. Run around the building until you find the box.

It seems quite easy but at every base, there are multiple NPC IO guards that will attack the players. Besides this there are hidden security cameras to be on the lookout for that can be destroyed.

Always remember, there are other players too that are looking for these weapons. So prepare yourself before heading over to any of these bases on the map