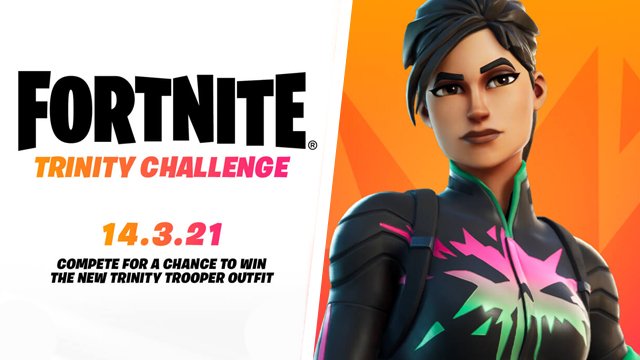 
Epic Games has announced the Fortnite Trinity Challenge, an EU-only Trios tournament that will pit the best teams of three against one another. Players who come out on top will earn early access to a new Trinity Trooper skin, as well as other cosmetic goodies. Those in the US and other regions are not allowed to play in this tournament. Read on for the details, including the Fortnite Trinity Challenge start date and time.

The Fortnite Trinity Challenge start date is March 14, with the start time being 2 PM GMT.

Here is the start time in other regions, though the challenge itself is EU Only:

Though US players can’t take part in the Fortnite Trinity Challenge, they can still cheer on their favorites EU streamers and other players. Obviously they will need to get up early Sunday morning in order to do so!

The Fortnite Trinity Challenge lasts for three hours in total; from 2 PM to 5 PM GMT. During that time, players will be able to complete up to 10 matches in order to collect points.

The top 3,333 players will receive the new Trinity Trooper skin, while anyone who competes in five or more matches will unlock the Triny Impact and Trinity Overload emotes. Those who can’t compete or miss out on the Trinity Trooper skin may be happy to hear that it will later be available in the game’s Item Store.

It’s almost time for the Fortnite April 2021 Crew Pack reveal. Here’s when it’s expected to release for the upcoming month.

A “Nintendo Switch Pro” is rumored to be launching later this year. Reports suggest that it will have an OLED screen and be able to output 4K resolution when in docked mode.

Epic Games has gone ahead and bought the Fall Guys developer, Mediatonic. Here’s the full story.

Which is the best Pokemon card pack opening simulator? (2021)
Twitch Chat Logs – How to Check Chat History on Twitch