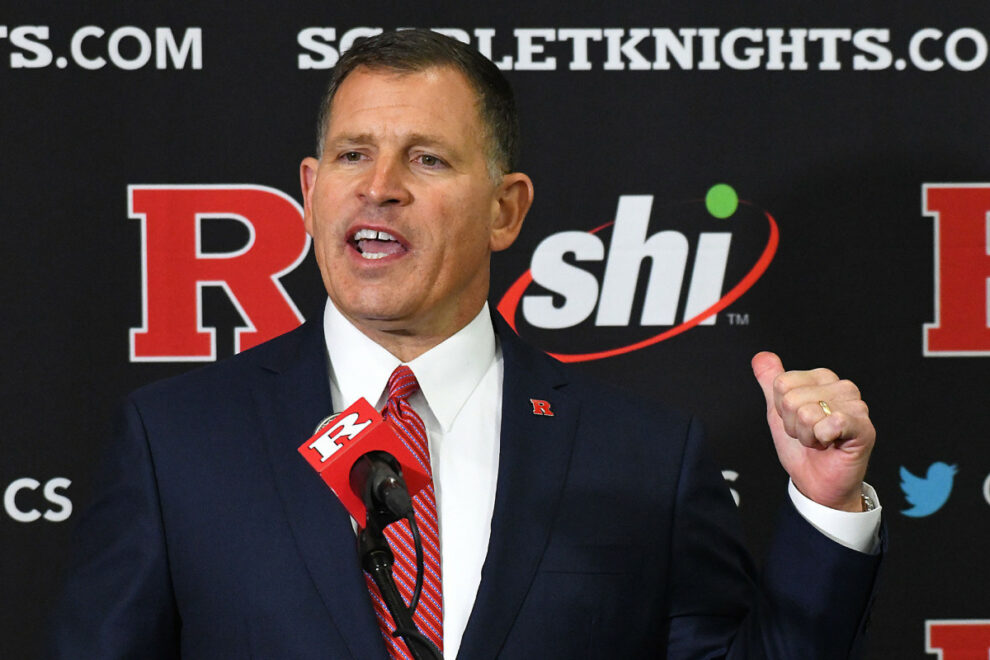 It started with a will-he-or-won’t-he saga, a soap opera of a coaching search that culminated with Greg Schiano returning to Rutgers after a lengthy and dramatic back-and-forth entanglement.

Three months later, the novel coronavirus hit. There was no spring football. The Big Ten went to a league-only schedule, then canceled the fall football season, only to reinstate it.

Finally, nearly 11 months after he reintroduced himself as Rutgers’ new football coach with a fire-and-brimstone speech, Schiano’s team will be on the field. The highly anticipated second go-around is at long last here. The “Chop” is back.

“It has been a roller coaster,” Schiano said this week, as Rutgers prepared to visit Michigan State on Saturday (noon, Big Ten Network) to kick off this truncated Big Ten season. “The whole thing’s a roller coaster, but that’s the world we’re in right now.

“One of the things we talked about when this thing really hit was, it’s not good enough to survive. We wanted to thrive throughout this. That was a big part of what we talked to our team about, and I believe they have [thrived]. We learned a lot about ourselves.”

It’s still difficult to know what to expect. Schiano declined to name a starting quarterback, listing Nebraska transfer Noah Vedral and sophomore Artur Sitkowski as possibilities. It was one of five positions with an “or” label on the two-deep depth chart, meaning the starter had yet to be decided. Key players such as top offensive playmaker Raheem Blackshear, starting center Mike Maietti and quality defensive linemen Elorm Lumor and Willington Previlon are gone off a team that went 2-10 a year ago and was outscored 355-51 in nine Big Ten contests, all of them losses.

Much has changed since Schiano last coached Rutgers, nine seasons ago. The Scarlet Knights have been Big Ten punching bags since joining the powerhouse conference in 2014, winning nine games overall the past four years and producing an abysmal all-time record in the conference of 7-45.

It should be noted, however, that Schiano is the one man who has been able to make Rutgers relevant. He led the Scarlet Knights all the way to a No. 7 national ranking in 2006. He guided them to six bowl games in his most-recent seven years in Piscataway and coached 83 players who went on to sign NFL contracts.

He returns as a more experienced coach, a former NFL head man with the Buccaneers, a defensive coordinator at Ohio State under Urban Meyer. He hired an elite coaching staff, bringing in experienced coaches with strong local ties. He hit the ground running on the recruiting trail, upgrading this roster with transfers such as Vedral, safety Brendon White (Ohio State), defensive lineman Michael Dwumfour (Michigan) and kick returner and receiver Aron Cruickshank (Wisconsin).

“Some folks said you’re getting Greg 2.0 because of the NFL experience and the Ohio State experience,” athletic director Pat Hobbs said in a phone interview. “I really think it’s Greg 4.0. He did a fantastic job at Rutgers the last time, but obviously he was new as a head coach, so there was a learning curve. And there really was no learning curve this time, other than obviously learning how to manage a program during a pandemic.

“When you look at how quickly he put together a phenomenal staff — it was both Jersey-focused and nationally focused — and you look at the results already in recruiting, and the decisions on the part of some young folks to transfer to Rutgers because they had confidence in Greg and confidence in his staff, I don’t know how you rate it other than an A-plus.”

Schiano, a Wyckoff, N.J., native, has declined to set specific expectations. His players have offered similar answers. This season is all about creating a foundation for the downtrodden program, and there is far more enthusiasm with Schiano in the fold.

The coaching staff has done well in recruiting — the 2021 class has 22 commitments, including 10 from New Jersey, led by four star outside linebacker Khayri Banton — and players believe they are part of something significant. They raved about the attitude they saw in workouts, even when it was uncertain if there would be a season.

“Guys are ‘chopping’ each and every single day,” said linebacker Tyshon Fogg, the team’s leading tackler a year ago. “Regardless of the circumstances, if we’re playing, if we’re not playing, whatever we did in the past, guys just came out to work every single day.”

It remains to be seen how much a new coaching staff, some new players and a new attitude can change things. It will take time for Schiano to rebuild the program. Saturday will provide just the first look. But the excitement is there. That isn’t something anyone could say about Rutgers in recent years.

“It feels like,” cornerback Avery Young said, “the atmosphere is building up to what Rutgers has been in the past.”