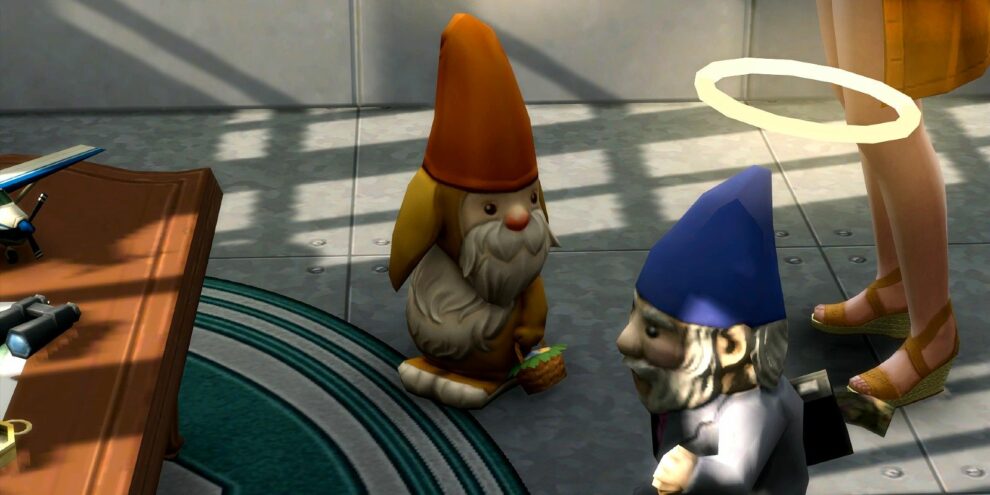 
During the HarvestFest event in The Sims 4 Seasons, Sims will be visited by mischievous gnomes. They must give gnomes specific gifts to appease them.

Holidays are a key feature in The Sims 4 Seasons Expansion Pack, and, during Harvestfest, a Sims Thanksgiving celebration, Sims will find different Gnomes appearing in and around their homes. These Gnomes can teleport around a Sim’s property and wreak havoc, sometimes breaking appliances and making a mess. As part of the Harvestfest festivities in The Sims 4 Seasons, Sims will need to appease each Gnome with a gift. When appeased, Gnomes become happy, indicated by a halo above their hats, and will drop seeds for a Sim to plant and sell in their garden. The Gnome will stick around after the holiday and serve as a garden decoration. If Sims give a Gnome the wrong gift, they will become angry, indicated by fire above their hats. Unhappy Gnomes will more aggressively mess with a Sim’s house until the day ends or the Gnome is sold.

There are 12 different Gnome varieties that may appear during Harvestfest in The Sims 4 Seasons, and players can tell them apart based on their costumes. Gnomes will want one of six kinds of gift: Coffee, Salad, Pie, Toy, Fruitcake, or Future Cube. Sims don’t need to have any of these things in their Inventory specifically and can use special interactions available during the Harvestfest holiday to gift these items and appease the Gnomes. Here’s how to appease every Gnome during the Sims 4 Seasons Harvestfest holiday event and what to do if a gift fails to appease them.

Sims will always need to offer a gift to appease any kind of Gnome during Harvestfest in The Sims 4 Seasons Expansion Pack. Most Gnomes have a single gift they really prefer, though many will be appeased with more than one of the six options. The tip given in the information panel for Harvestfest tells players to give Gnomes toys to appease them. While this is true for some of the Gnomes, this tactic will not work on all 12.

If players accidentally give the Gnome the wrong gift and fail to appease it, the Gnome will shoot fire from the top of its head and begin to more aggressively break things around the Sim’s home. Sims have two options at this point. They can try to apologize, but the Gnome may not accept the apology. If the Gnome refuses to accept a Sim’s apology, it will lift the Sim up and zap them with electricity, leaving them with the Dazed moodlet for a short time. Sims can also kick the offended Gnome, which will upset all Gnomes in the house regardless of whether the Sim successfully appeased them and lead to further chaos.

If a Gnome refuses to be appeased, players can also enter Build/Buy Mode and sell the Gnome for Simoleons to prevent any further damage on their lot. Even unsuccessful attempts to appease Gnomes count toward the Sim’s Harvestfest holiday success in The Sims 4 Seasons, leading to a Sim feeling more fulfilled once the day is over.

Next: How To Make The Sims 4 Fun Again

The Sims 4 is available for PC, PlayStation 4, and Xbox One.

Maria Meluso is a staff game guide and game review writer for Screen Rant based in the Midwestern United States. She covers everything from massive, open-world RPGs to small-scale indie horror projects. She’s the kind of person who loves instructions and manuals but who is stubborn and competitive enough to wait to consult game guides until she’s hit game over at least 15 times. When not writing, you can usually find her playing fantasy RPGs like Dragon Age and writing screenplays.