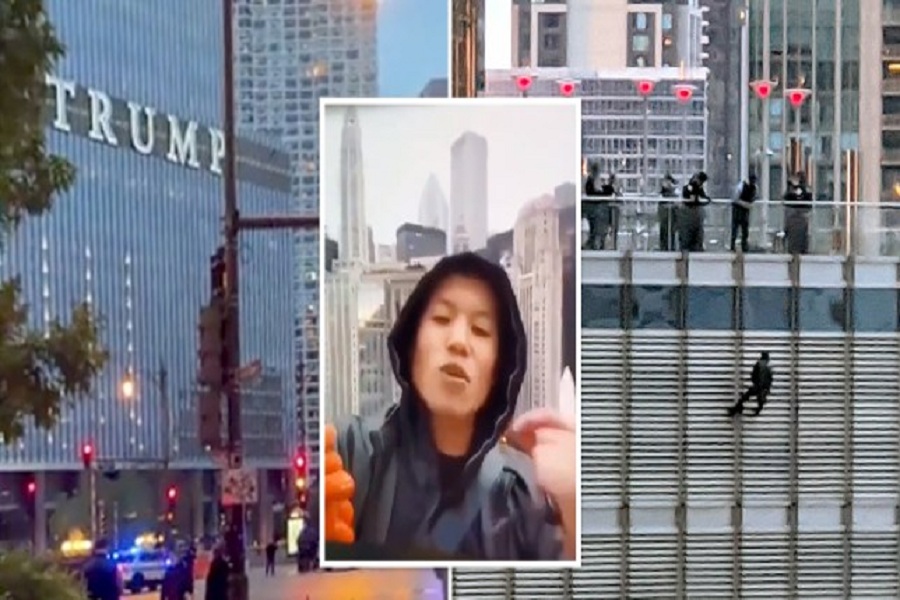 A man who spotted hanging off the side of Trump Tower from a rope on Sunday evening and he was demanding to speak to President Donald Trump. The man is expected to be 20 years old and he  has been dangling from the trump tower’s 16th floor balcony from around 5.30PM. The man was asking to speak to the US president and also he was trying to get his message to the media. The Police officers at the scene said they think that the man is using a climbing harness. The hanging man also threatened to kill himself. A negotiator was trying to get the man down from the deck. At 1:36 a.m. Monday, Ahern, the police officer tweeted that all the efforts are being made to bring a positive conclusion to this situation. The traffic on Upper Wacker around Trump Tower, overlooking the Chicago River at 401N Wabash Ave has been blocked by the Police. A crowd gathered around the tower. It was rumoured to be part of a publicity stunt for the upcoming Batman movie which was shooting in the city recently.

On Monday morning, the CTA announced reroutes through the area on the southbound 6, 134, 135, 136 and 146 bus routes because of ongoing police activity at Wacker and Wabash. Dangling from a rope off Chicago’s Trump Tower Sunday night was an alleged member of the Black Lives Matter movement – demanding to speak to the president and the media, as stated by a report. The unidentified man expected to be 20years old witnessed hanging off the side of the riverfront skyscraper around 5.30PM. The man threatened suicide, desired to speak with Trump and the media, Police told the newspaper.

A video of this man, filmed while hanging from an orange rope, began circulating later Sunday night on social media — and at one point acknowledging he’s in Chicago — the man identifies himself as a Black Lives Matter member with a message for Trump, the footage shared by Inside Paper stated. “I don’t want to die. I’ll jump and die if someone tries to pull the rope,” the man said, panning the camera down for a view of the Chicago River. “I have a knife. If someone will try to pull, I will cut the rope and will probably die. Though he did not make clear what he wished to speak to Trump about, but said, “If Mr. Trump, promises something he should fulfill it before the election.”

The man, estimated to be in the 20s desired to have a conversation with trump followed by a threat if his demands  were not met, stated the Officers who first received the reports of him hanging from the Trump International Hotel and Tower at 5.27 p.m. Later streamed live on the Facebook, this video of the man identified him as a Black Lives Matter member as he threatened to cut the rope with the knife he had, if somebody dared to “pull on it”.