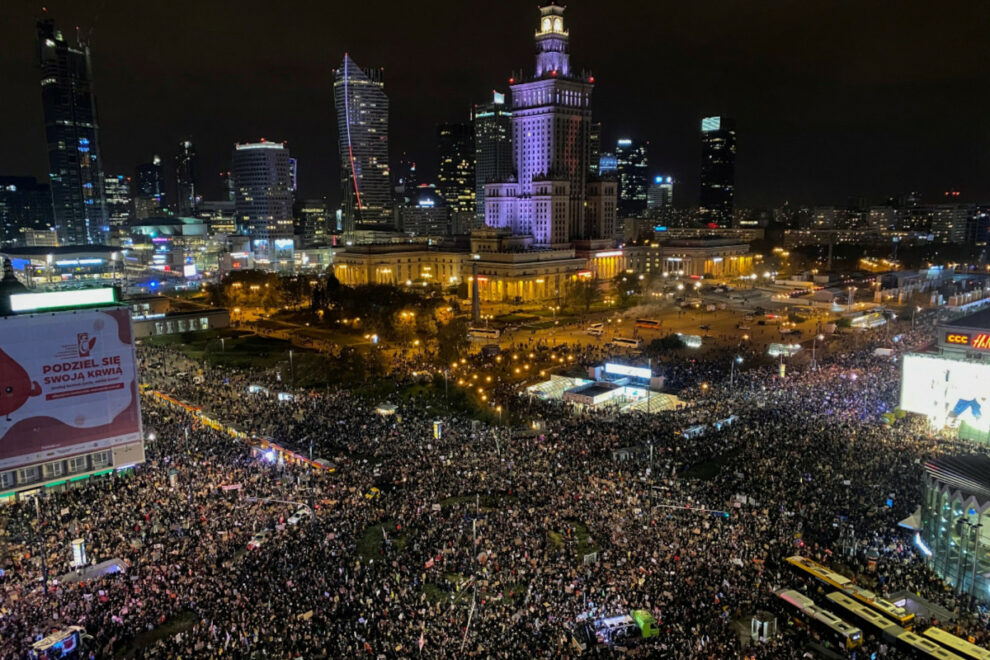 
WARSAW – As Poland’s abortion protests continue into a second week, their top organizer, Marta Lempart, says she is grateful for a clear role model to the East – Belarus’s opposition movement.

Tens of thousands have gathered across Poland, with the largest protests on Friday in Warsaw, since the Constitutional Tribunal further limited the country’s already restrictive abortion laws, making terminations due to fetal abnormalities illegal.

Hundreds marched through the streets and rallied outside universities to keep pressure on Belarus President Alexander Lukashenko to resign.

Lempart, a 41-year-old lawyer by training and one of the heads of Strajk Kobiet (Women’s Strike), thinks the parallels between the Polish and Belarusian movements are clear: they are being run by Eastern Europeans and by women.

With her thick-framed black glasses and blonde hair speckled with gray, she has led daily marches across Poland, giving speeches to the point of losing her voice and encouraging people to go out on the streets despite the coronavirus pandemic.

“We see that many things work in a similar way in Poland and in Belarus…we are culturally close still. We are in the European Union…but we have this common spirit with many countries to the east of Poland,” Lempart told Reuters, wearing a black mask bearing the movement’s signature red lightning bolt.

“I think it is a backlash against a patriarchal culture, against patriarchal states against the fundamentalist religious states, against the states that treat women really badly,” she added.

Unlike Belarus opposition leader Sviatlana Tsikhanouskaya, Lempart is no activism novice having been involved in Poland’s “black protests” for women’s rights since 2016.

But she is looking to Tsikhanouskaya for ideas on how to keep protests going despite a surge in coronavirus cases in Poland.

Strajk Kobiet set up its own “coordination council” on Sunday, modeling it on the Belarusian initiative which brought together activists, economists and former politicians to plan out the burgeoning revolution in Belarus.

After the first meeting in Warsaw, Lempart said the group wanted better access to abortion, stronger women’s and LGBT rights, the separation of church and state and more support for a struggling healthcare system, small businesses and education.

Lempart insists the goal of the protests is not to create a political movement, although she is hoping for greater European Union support.

“They should be protecting us, the Polish citizens…They are turning their backs on us and talking just to the Polish government and they should be talking to us,” Lempart said.

In the meantime, the goal of the women’s strike is to ensure the protests continue, despite a record daily spike in coronavirus cases in Poland on Saturday of nearly 22,000.

A blockade is planned on Monday while a solidarity chain into smaller Polish towns is scheduled for Wednesday.

“We won’t get scared,” Lempart said. “People might get tired. This is our job in supporting people in not getting tired.”