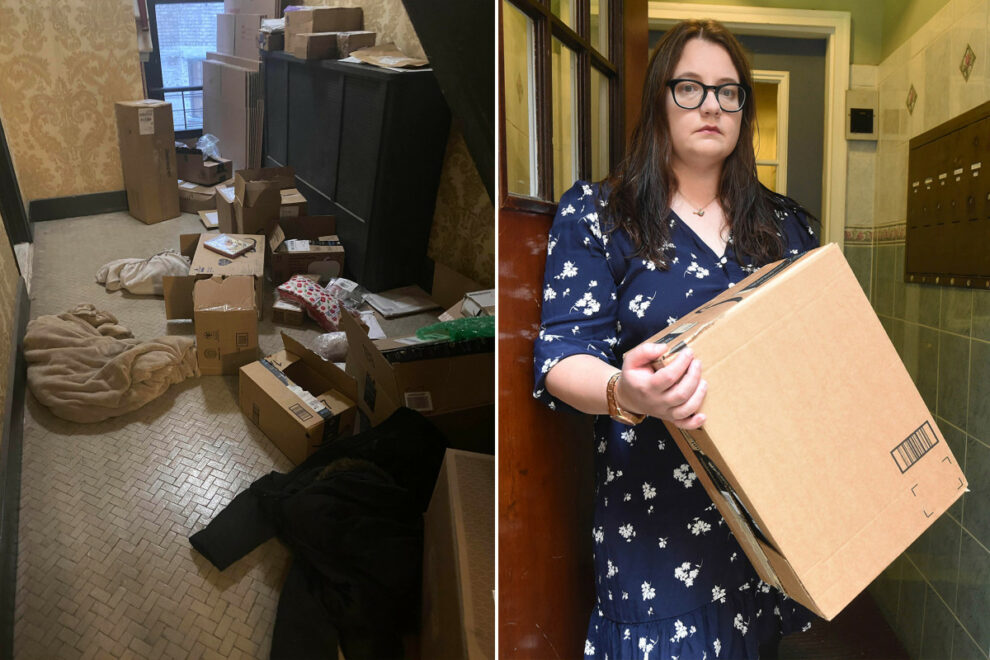 They’re a new breed with a new M.O.: more brazen and pickier, ripping open packages, grabbing the priciest stuff, and leaving the boxes and bubble wrap behind.

Adelaide Spence is a victim. So is Sebastian Shapiro, Alex Morton, Jennifer Chused and tens of thousands of other New Yorkers across the city who have had their deliveries either picked over or stolen outright — sometimes while they were working from home.

Thieves are hitting most often, at least anecdotally, in Manhattan’s well-to-do neighborhoods like the Upper West Side and across Brooklyn.

“Every single neighborhood,” Chused, 49, an interior designer who lives in Fort Greene, told The Post. “Every single person I talk to is talking about their packages getting stolen.”

The NYPD doesn’t separate out package thefts from all larcenies so there aren’t statistics to back up the stories. And nobody knows for sure why there seems to be a spike, but many victims blame the coronavirus: the high number of New Yorkers left jobless combined with a big bump in quarantine online shopping.

The city’s September jobless rate stood at 14.1 percent, a huge leap from 3.7 percent a year ago — and the number of deliveries jumped from roughly 1.6 million in 2019 to 2.4 million so far this year, according to the Center of Excellence for Sustainable Urban Freight Systems in Troy, New York.

Adelaide Spence was on the job at One Police Plaza when bandits hit her Brooklyn Heights apartment twice in mid-September. She’s certain her long hours as an NYPD sergeant and her non-doorman building made her an easy target.

Two of her four packages vanished, and two others were rifled through. Pants, a scarf, a watch, Frye boots — worth roughly $350 in all — stolen in a span of two days. The thief didn’t want her new frying pan, though.

Spence went to her local precinct, the 84th, and filed a complaint, but officers can’t do much without evidence, like security video or an eyewitness.

“It sucks,” said Spence, who now forks over $150 a year to rent a Post Office mailbox.

One Sunday a few weeks ago, Sebastian Shapiro noticed “all the packages helter-skelter” in the lobby of his non-doorman building near West 71st Street and Broadway. A few packages had been emptied, though the Shapiro family’s reptile tank lights went untouched.

Shapiro posted a photo of the crime scene on Facebook, which triggered dozens of responses — Upper West Siders telling their own stories of boxes stolen, doormen hired, and video intercoms installed.

“I’ve never seen anything like that, and I’ve been in this building four or five years,” said Shapiro, 47, who works in analytics.

“They’re following postal, UPS, FedEx workers into the building,” she told The Post. “They hide out on the second or third floor until the coast is clear, then break out their backpacks.”

Morton, a 34-year-old actor/restaurant manager, had a $70 white blazer and a $45 blouse from Banana Republic ripped off. Now, she has everything delivered to her workplace.

“At least the chances of getting your packages at work are higher than at home,” she said.

The brazenness is what Jennifer Chused can’t believe. She has been hit four times in the past four months. And her townhouse has a Ring video doorbell.

The pilferers opened one box, spotted office supplies, and moved on. They opened another and took out a watch that her husband had ordered. LED light bulbs and children’s clothing vanished. Everything totaled: Roughly $1,000.

Chused didn’t file a complaint because she didn’t have any evidence — the crooks were camera-shy — but she’s not standing idly by. She thinks she and her neighbors could stop porch piracy if they all put out “booby trap” boxes. Inside each would be a dye-soaked cotton pad that would stain the crook’s hands and a note that reads: “This theft has just been videotaped by Neighborhood Watch and is now with the police.”

She knows the idea is silly, but she’s fed up.

“We just have to try to stop them.”