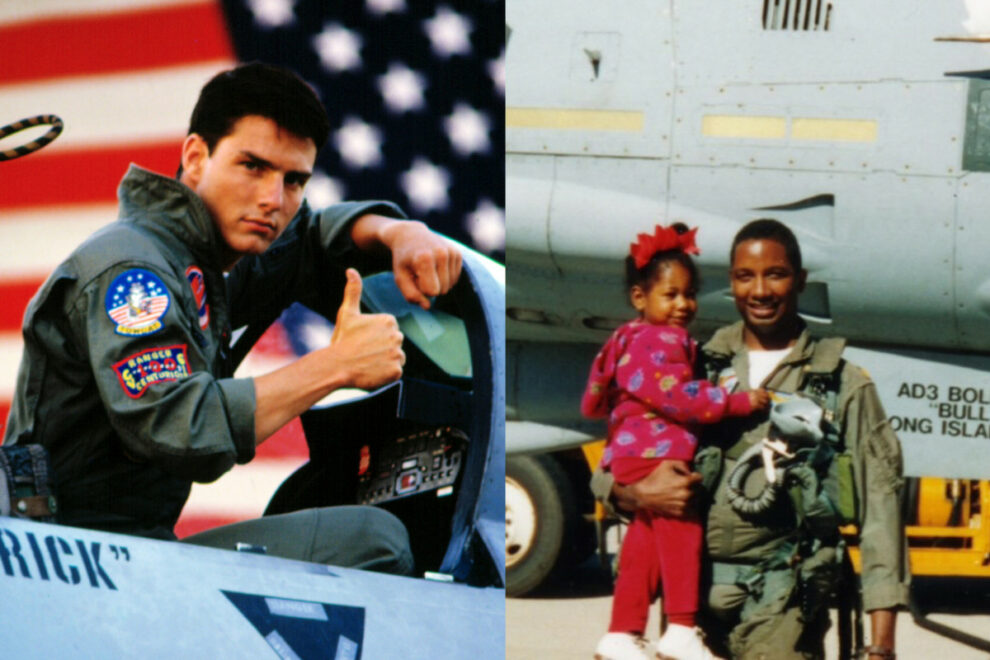 
In 1985, Capt. Marco Cromartie was heading into the Replacement Air Group — the final portion of training for Navy aviators — when he received glitzy marching orders.

“I was as green as you could get,” Cromartie, now 60 and retired, told The Post. “I had yet to step foot into an F-14.” He was also, he admitted, “tall, dark and handsome” — and so he became one of the few actual naval officers to be cast as extras in the film “Top Gun,” playing pilots alongside Tom Cruise, Anthony Edwards and Val Kilmer.

It didn’t matter that Cromartie hadn’t yet logged any hours in the F-14 Tomcat, the sleek fighter jet made famous by the blockbuster. “The actors looked at us like we were heavy hitters. They really invited us into their world,” Cromartie said. “In the evenings, we would go out and go to bars in San Diego to hang out. They were studying us.”

He recalled how Cruise “walked on that set as [the character] Maverick in the morning and didn’t come out of character until we ended at night.”

Since the movie was shot out of sequence, Cromartie didn’t know the full plot. “We thought it was going to be really stupid and a waste of six weeks. But when we went to the premiere, I realized that we were a part of something special,” said the pilot, who went on to attend the real Top Gun school.

The movie also made the F-14 Tomcat fighter jet a symbol of American military prowess. In the new documentary “Tomcat Tales,” available on Amazon, Cromartie and his elite band of brothers dish about their high-flying antics, the planes’ role in the War on Terror and, of course, its Hollywood close-up.

Directed by retired F-14 pilot Commander Mark Vizcarra, who attended Top Gun, the film is a love letter to the Tomcat. He first fell for the F-14 through the 1980 movie “Final Countdown,” starring Martin Sheen. “When I saw the Tomcat, I said, ‘I want to fly that plane,’ ” he told The Post. “It ruled the skies for years. It can get up to really high ­altitudes where you can see the curvature of the earth.”

The plane, made by Grumman, was introduced in 1968 as part of the United States’ Cold War strategy and implemented by the Navy in the ’70s. Able to travel twice the speed of sound, it was known for blistering speed and sophisticated weaponry — specifically, the AIM-54 Phoenix, a radar-guided, long-range air-to-air missile.

“The missiles were a million dollars apiece. It was like having a million-dollar finger,” said Vizcarra, 60, of being able to test a Phoenix.

The superior machine was ripe for a Tinseltown script. But as Vizcarra notes, beyond F-14 pilots having the need for speed, not a lot in “Top Gun” was true to life.

“The first movie was fake. When they are flying upside down, canopy to canopy, and the fly-bys — the moment anyone would do that in the Navy, you would get your wings pulled,” he said of Maverick’s reckless antics in the movie.

But the big-screen version did help the real pilots with women. Mark’s younger brother Michael, a captain who attended and was an instructor at Top Gun, arrived at Naval Air Station Miramar (now a Marine airbase) in San Diego before the movie premiered. At the time, the Miramar Oak Club, which was supposed to be the place where Maverick serenaded Kelly McGillis’ character, was a sleepy joint that attracted divorcées.

“After the movie, that place was a rocking hub of college girls waiting in line. It got three times as many ladies as before. It was like Studio 54,” said Michael, 59.

He was deployed to fly the Tomcat in the War on Terror just nine days after 9/11. In one mission in Afghanistan, he used its precision weaponry to bail out Special Forces being chased by a large Taliban convoy on the ground.

“They said ‘we got a hot situation and we need someone now.’ We rolled in, dropped bombs, blocking the road . . . We shot all our bullets, took out most of the convoy and the Special Forces lived to see another day,” said Michael, who retired in 2004. “It was both adrenaline and gratification.”

However, there was one big failure during that mission. Pilots had to relieve themselves in packets filled with dry powder that turns to a gelatin-like substance. His flying partner’s waste bag got loose in the cockpit. “His bag came out flying and landed right on his neck,” said Michael with a laugh.

The Tomcat was retired in 2006 during a ceremony in Virginia Beach, Va., and replaced by the Super Hornet. “They did a ceremonial last flight. It was such a badass plane, but it needed to retire. I choked up a bit,” said Michael.

But the Tomcat isn’t completely gone. In the upcoming ”Top Gun” sequel, it has a cameo, albeit a CGI one, according to Vizcarra, who attended a top-secret preview at a Navy event. “The flying scenes are better than the original,” he said.