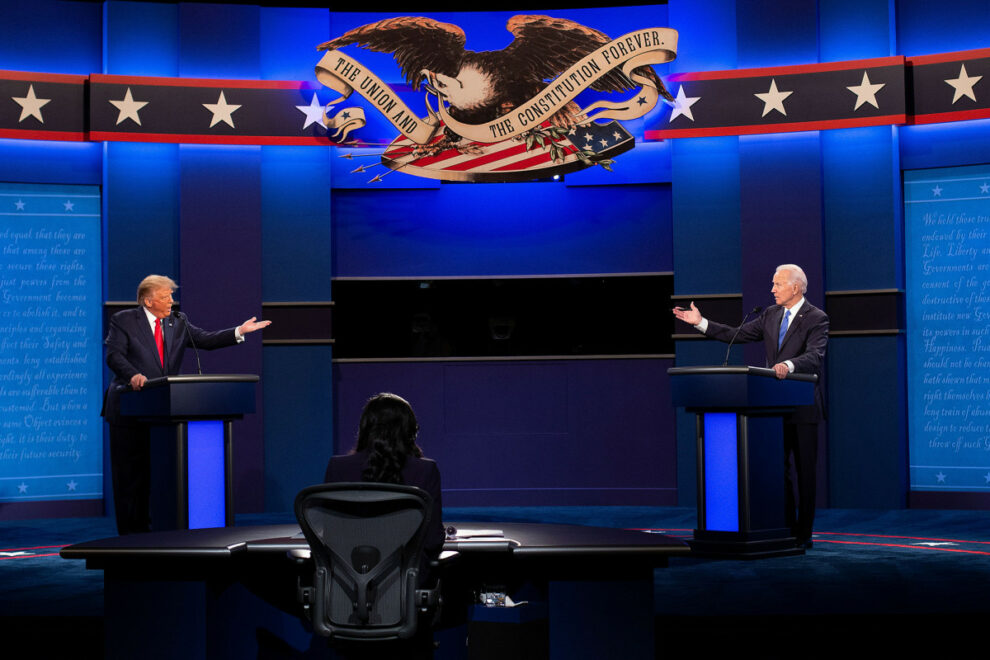 Are both presidential candidates trying to lose? Or at least pursuing campaign strategies that put them at grave risk of defeat?

In nearly four years, Donald Trump has made little effort to win over the 50 percent-plus of voters who didn’t support him in 2016. Having proved that he could win the presidency without a plurality of the popular vote, he has ignored the possibility that he could govern more effectively if he were reelected with an absolute majority.

You can see the results as Trump supporters scan the polling data for encouraging information. They quickly pass over the national polls showing him trailing by 7.7 percent, according to a RealClearPolitics average of recent polls. They focus instead on the chart showing him running slightly better against Joe Biden in the battleground states than he was against Hillary Clinton two to three weeks out in 2016.

If these numbers prove as much off the mark as in 2016, Trump could win a second term with 270-plus electoral votes. But that conclusion requires a lot of assumptions.

Past polling hasn’t leaned consistently toward one party, and pollsters tend to compensate — often overcompensate — for apparent past mistakes.

Astonishingly, Trump has failed to emphasize his two signature 2016 issues: immigration and trade. He can claim that his new trade agreements and economic policies have produced income and wealth gains disproportionately favoring low-wage workers — something administrations of both parties have failed to achieve for a generation.

And he can argue that his immigration policies — and the cooperation he has successfully wrested from Mexico — have prevented the surge of unskilled illegal immigrants that could easily resume the minute the networks call the election for Joe Biden.

Biden has a different strategy, with risks of its own. With a solid lead in the polls, and with COVID-19 providing a rationale for laying low, he’s running out the clock. On nearly half the days in September, his staffers announced an early lid. Sometimes, he’d generate no news after 9 a.m. He took three days off this week for debate preparation.

He and vice presidential nominee Kamala Harris have taken almost no questions from reporters, almost all of whom seem determined not to ask anything that might hurt his chances.

Biden has answered which flavor milkshake he ordered but has refused to say whether he, like many other Democrats, would support packing the Supreme Court. He chewed out the one reporter who asked him about his son Hunter’s business deals. Harris, similarly, keeps out of question range. ABC’s Jonathan Karl notes that she’s taken more questions from the cast of “The Avengers” than from the traveling press.

Obviously, the Biden-Harris ticket is deflecting attention from the radical policies that Biden has endorsed — and that almost everyone in the press corps favors. After 40 years of opposing government-paid abortions, he now backs them. He’s likely to use regulations to reduce fracking, which has reduced gas prices and carbon emissions. His tax increases threaten to stymie economic recovery.

There’s one problem with this strategy: If something does rock the boat, it could tip it over. A sudden brain freeze or an unanticipated negative story could capsize the campaign. Efforts to help the Biden campaign, such as Twitter’s and Facebook’s attempts to conceal the New York Post’s Hunter Biden story, could boomerang and catch voters’ attention.

The Biden campaign is aware of the risks. It quickly rejected the Trump campaign’s proposal to reschedule the canceled Oct. 15 debate to Oct. 29.

The fact is that both these septuagenarian candidates are capable of political self-harm.

They have been willing to share their vagrant and passing thoughts on matters momentous and trivial at great, and sometimes embarrassing, length. The question now is whether Trump can repress that impulse or provoke Biden to indulge it.