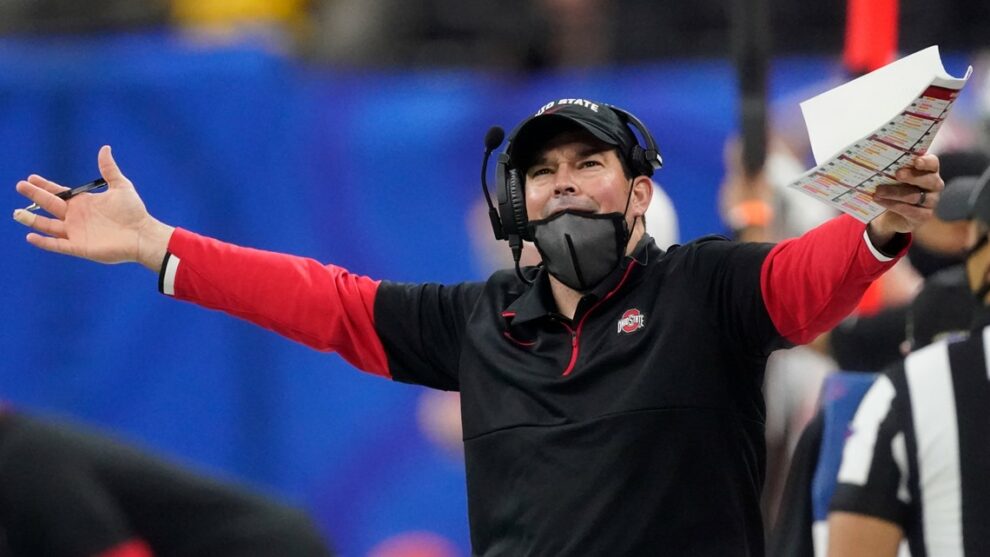 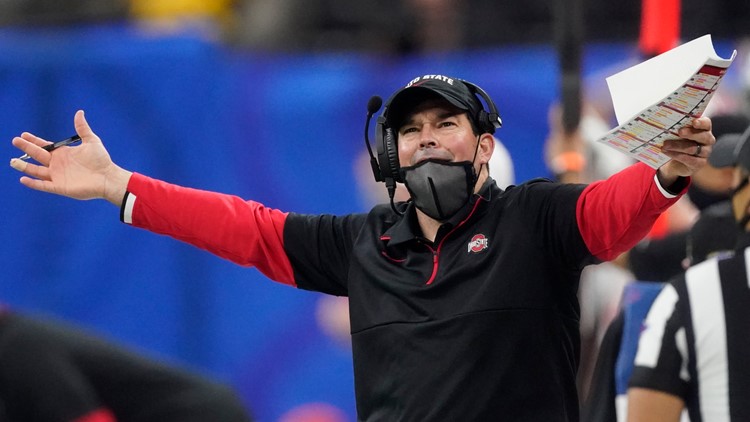 Our Buckeyes take on the top-ranked Crimson Tide Monday night in Miami.

Much has been made of Alabama’s transformation from a dynasty built on Nick Saban’s calling card lock-down defense to one powered by a prolific offense.

No. 3 Ohio State, which faces the top-ranked Crimson Tide on Monday night in the national championship game, has undergone an offensive evolution of its own in recent years.

Former Ohio State coach Urban Meyer’s desire to rejuvenate an attack that was shut out in the 2016 playoff by Clemson led him to Ryan Day, who provided exactly what the Buckeyes needed to become more potent and — as a huge bonus — ended up being an ideal successor to his former boss.


“When he got here, I had the opportunity just to see him coach. I knew we were going to be different,” Ohio State athletic director Gene Smith said. “His football IQ overall is phenomenal, but offensively it’s at another level. He’s a creative thinker. His ability to analyze and dissect, you know, the chess game, so to speak, is really, really outstanding.”

Day was hired as quarterbacks coach and co-offensive coordinator by Meyer in 2017, just days after the Buckeyes lost 31-0 in the Fiesta Bowl semifinal to Clemson. Since then, Ohio State’s offense has taken off. Not only have the Buckeyes become more productive, but the way they play has helped make the program a more desirable destination for blue-chip quarterbacks.

“We had a pretty prolific offense with that we were doing, but we needed to recognize what was happening around us,” Smith said.

The last time Ohio State won a national championship was 2014, the first year of the playoff. Meyer’s spread offense leaned heavily on the read-option and quarterback running game. J.T. Barrett played most of that season at quarterback and became a Heisman Trophy contender. Famously, Cardale Jones stepped in after Barrett was injured late in the season and led the Buckeyes to the title.

Jones was not as good a runner as Barrett, but had a much bigger arm to stretch the field. That seemed to help when the Buckeyes faced Alabama in the semifinals.

The next two seasons, Ohio State’s offense produced good numbers and the team continued to pile up victories. On talent and athleticism alone, the Buckeyes could overwhelm most opponents but the offense was occasionally inconsistent — especially against the best competition.

The low point came against Clemson in Arizona. The Buckeyes had nine first downs and 215 total yards.

Meyer cleaned house and hired Day, who was coming off a two-year stint in the NFL, and former Indiana coach Kevin Wilson to be co-offensive coordinators.

“When we came here it wasn’t like we were putting ideas in. We were learning what Coach Meyer wanted us to do, period,” Wilson said.

Day said his discussions with Meyer were mostly about how best to utilize talent.

“Each year it’s changed, tweaked here and there, but at the end of the day I think the basis of (the offense) has pretty much stayed the same,” Day said this week.

Day’s roots go back to New Hampshire, where he played quarterback for Chip Kelly, who was offensive coordinator at the FCS school. Kelly had known Day for years before coaching him.

“When he was done playing and got into coaching it was kind of a no-brainer,” said Kelly, now head coach at UCLA.

Day landed on Meyer’s staff in Florida as a graduate assistant and stayed connected to Meyer’s coaching tree, working with Steve Addazio, a former Florida assistant, at Temple and Boston College.

Kelly brought Day to the NFL for two seasons with Philadelphia and San Francisco. When Day returned to college football he did so with the blueprint of an NFL passing game that attacks the field more vertically than Meyer’s offense did.

Day also brought an understanding of maybe the biggest difference between the NFL and college game: You can’t be the same team every week.

“It’s about matchups,” Kelly said. “I think he did a really good job in the Clemson game in matching their tight ends. That was an advantage for him, their tight ends on the Clemson linebackers and safeties. And that’s what the NFL taught us is that each week the matchup’s different.”

In 2018, with Dwayne Haskins at quarterback and Day now promoted to sole offensive coordinator, the Ohio State offense moved closer to what it is today. Day also took over as acting coach for three games while Meyer was serving a suspension related to his handling of domestic violence allegations involving a former assistant coach.

The Buckeyes won all three games without Meyer, and Haskins went on to become a Heisman Trophy finalist and the first Ohio State quarterback drafted in first-round in more than 30 years.

When Meyer stepped down after 2018, Day was Smith’s choice to take over. His first big win? Persuading quarterback Justin Fields, a former five-star recruit, to transfer from Georgia to Ohio State sight unseen.

“It was just Ohio State’s — their success with quarterbacks on the college level and just the amount of success that I would have under Coach Day and being able to learn from him, because of course he’s been in the NFL. He’s been to the level that I’m trying to go,” Fields said.

Last season with Fields, Ohio State averaged 6.94 yards per play, its best output since the 2014 season (6.98). This season, the Buckeyes are at 7.51 after going for 8.87 against Clemson in the Sugar Bowl semifinal.

And while Fields will likely be high first-round pick in the next NFL draft, the Buckeyes quarterback room is looking good for the future after signing two four-star recruits in 2020 (C.J. Stroud and Jack Miller). Ohio State also has a commitment from 2022 five-star Quinn Ewers.

Meyer went 83-9 in seven seasons at Ohio State. Remarkably, the Buckeyes still appear to be trending up with Day.