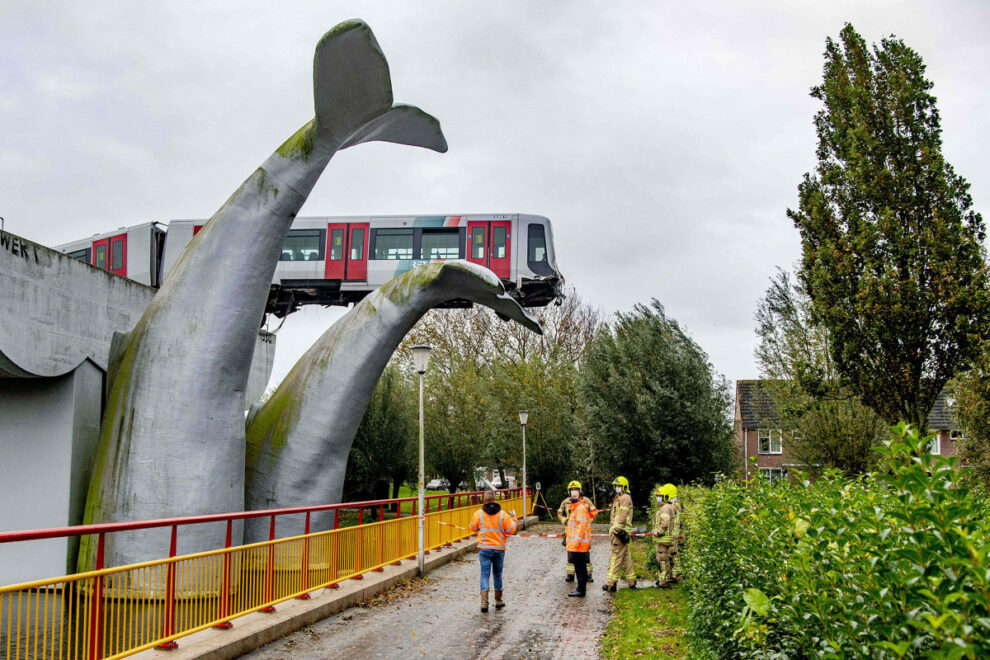 
A metro train was beached upon a whale in the Netherlands late Sunday night.

The conductor smashed through a barrier that would have led 32 feet down to water below, had it not been for a fortuitously placed sculpture of a whale’s tail at the De Akkers metro station, in the suburb of Spijkenisse, near the city of Rotterdam.

Authorities haven’t been able to make heads or tails of how to remove the train from its dorsal perch.

“We are trying to decide how we can bring the train down in a careful and controlled manner,” a local official told the Dutch outlet NOS Monday.

There were no passengers aboard the train except for the driver, who was reportedly able to escape from the dead-end track on his own. He was taken to a hospital for evaluation and reportedly doing well.

The sculpture, titled “Saved by the Whale’s Tail,” according to Reuters, a reference to what rail engineers call a “tail track,” was erected in 2002 by architectural artist Maarten Struijs. He was evidently eager to survey the fluke.

“I’ll make sure that I get a few photos,” he told NOS. “Because now it is at its best.”

Struijs was surprised to find out the structures held up.

“It has been there for almost 20 years,” he noted. “You actually expect the plastic to pulverize a bit, but that is apparently not the case.”