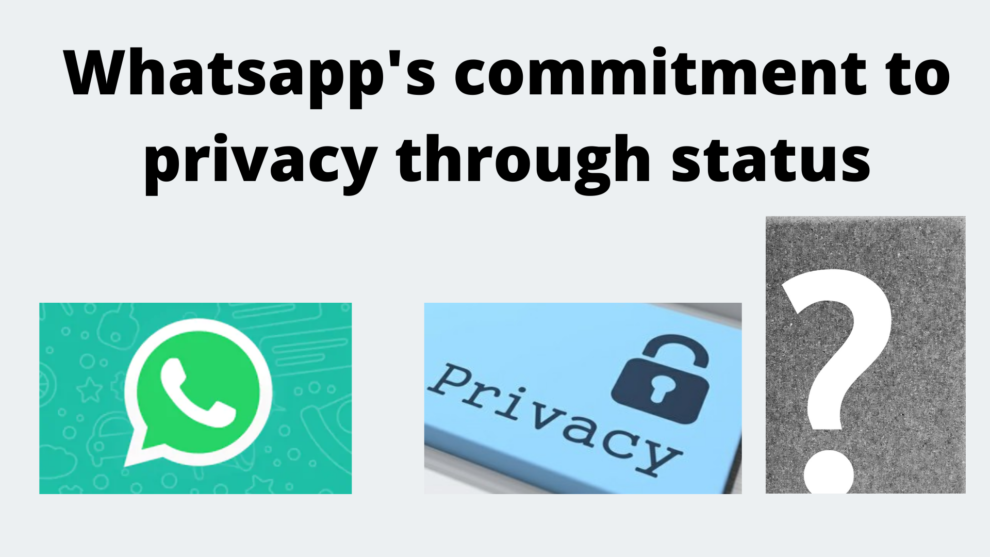 I have seen a status by WhatsApp, the American messaging company, posing about “commitment to your privacy”. Haven you saw that? If not, you might see it soon.

As the privacy policy gets updated, many rumors have been made about data breaching. The users worldwide were worried about this and starting to move to other platforms but as soon as users start taking these steps, WhatsApp sends a WhatsApp status to all users commenting on its privacy.

In the era of the Internet World, we never know who is stealing our data and how. But it’s fine and tolerable when limiting to name but if our personal or private information gets stolen, it a matter to think upon. After Whatsapp Privacy policy updation, a rumored wave crossed the internet revealing “Whatsapp is reading your private chats and stealing your private and confidential information too”. These messages have seen in India in the mid of January while in the US and UK these messages are started to appear from the 29th of January.

The status messages read “One thing that isn’t new is our commitment to your privacy,” along with a reminder that “WhatsApp can’t read or listen to your personal conversations as they’re end-to-end encrypted.”

Taken from sources, a WhatsApp spokesperson said that “There’s been a lot of misinformation and confusion around our recent update and we want to help everyone understand the facts behind how WhatsApp protects people’s privacy and security.”

He added, “Going forward, we’re going to provide updates to people in the Status tab so people hear from WhatsApp directly. Our first update reaffirms that WhatsApp cannot see your personal messages and neither can Facebook because they are protected by end-to-end encryption.”

$2.5 million to underpaid female engineers is to be paid by Google
Niantic presence in India as a Statergic market: Looking to Hire